​I started this calendar in October 2017 with Samhein (Halloween).  Each square represents a solar holiday.  After the holiday happened I put in the square something that was important that I wanted to remember.  I am just now working on the center and it represents going inward and self reflection.  That is my goal for this year.

​This quote is from his 2016 Tony award acceptance speech after the Orlando shooting.  The speech was moving to me. 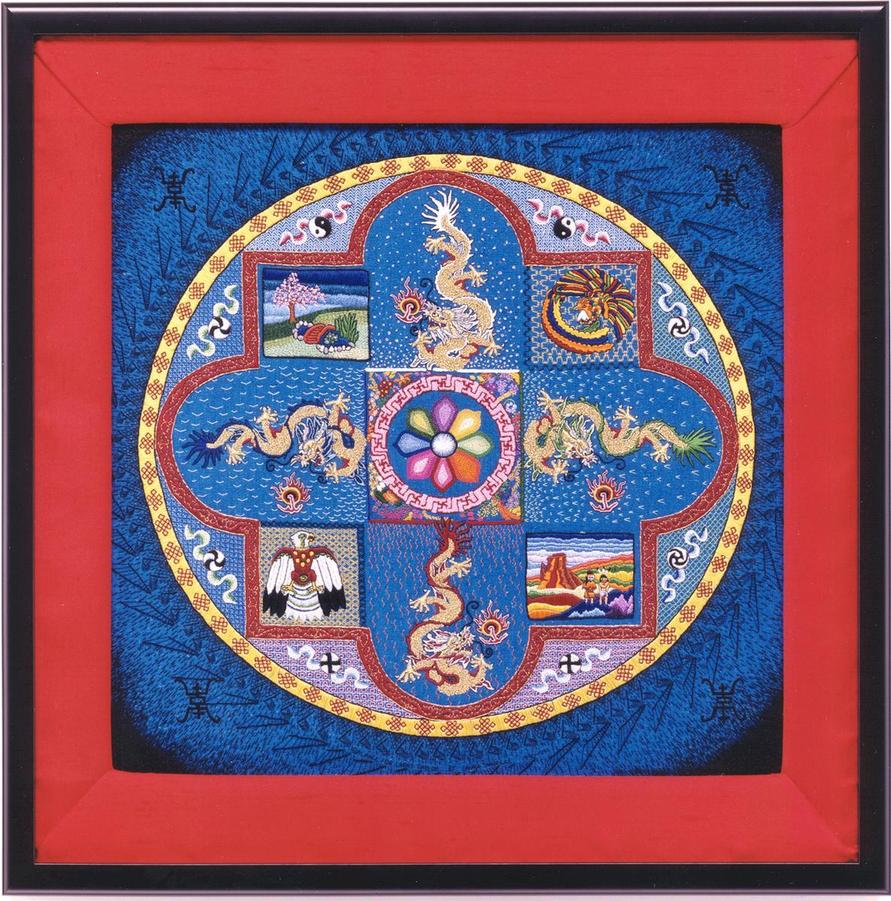 The four agreements are from a book by Don Miguel Ruiz about Toltec wisdom.  These simple and powerful agreements have helped me personally.

The word Sacred is not part of the four agreements, it's a word I just like.  Everything is sacred.

​I met an artist at the San Francisco School of Needlework and Design by the name of Anda Saylor.  Her needlework was amazing and she was great fun to talk to.  She asked if I had heard of glow in the dark thread.  I hadn't.  She gave me a skein of it.  It was a gift that meant a lot to me.  I decided to do something special.  I did this full moon with french knots and single thread satin stitch.  And it glows in the dark!  Thank you Anda.

​Hummingbirds are a symbol to be 100% present when communicating.  I put a rose quartz bead between them symbolizing love.  The circles in the back represent the 4 directions and elements.  East and Air, South and Fire, West and Water, North and Earth.  These directions are common in many ancient traditions.

​I had the good fortune to meet Diana Paxson.  She had just come from a demonstration where American flags were waving.  People were saying "Burn them!" and she disagreed.  The flag is everyone's.

People have commented that this is political.  This is not political.  It is the last sentence of the pledge of allegiance we all said in school. 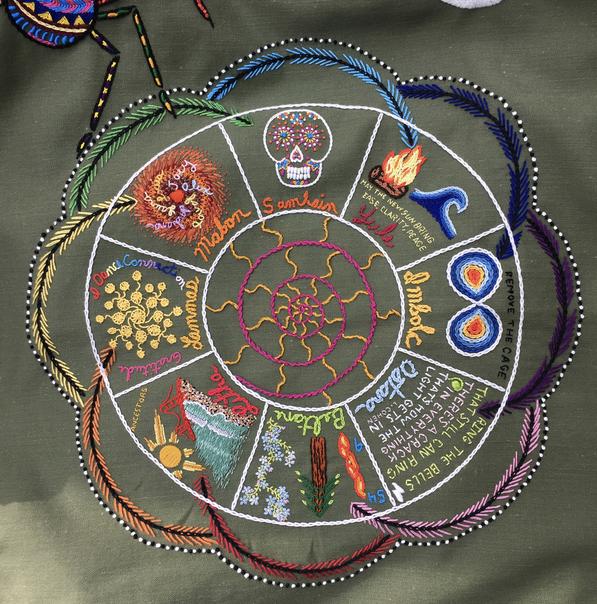 This mandala is inspired by the work of a local artist by the name of Henry Sultan.  His work is extraordinary.

​This is inspired by my friend Lori Hanson.  She has this quote on her card and I embroidered it on the sleeve of her jacket.  I liked it so much I put it on mine. 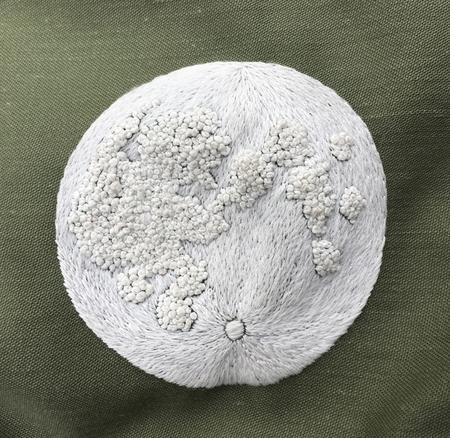 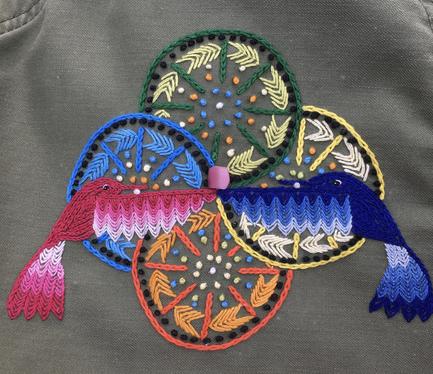 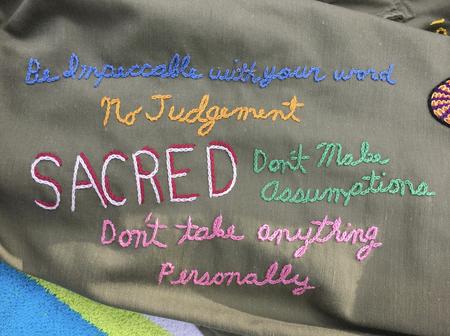 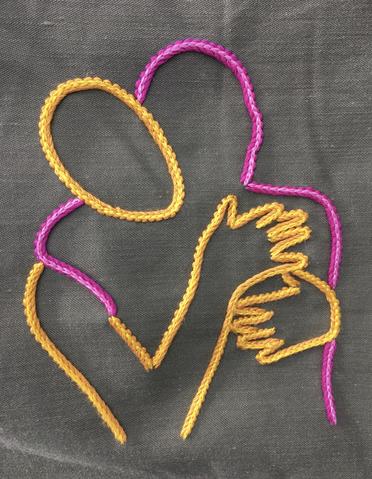 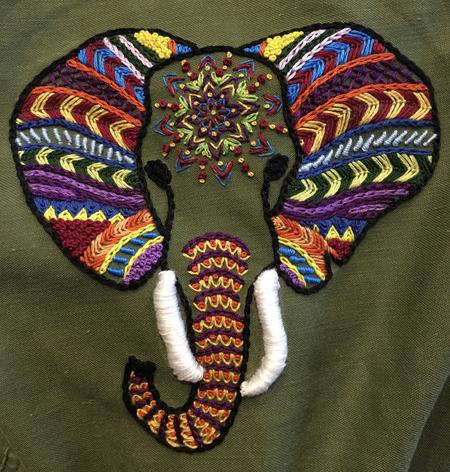 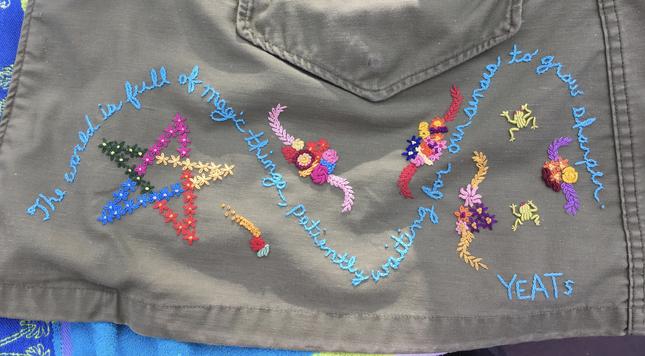 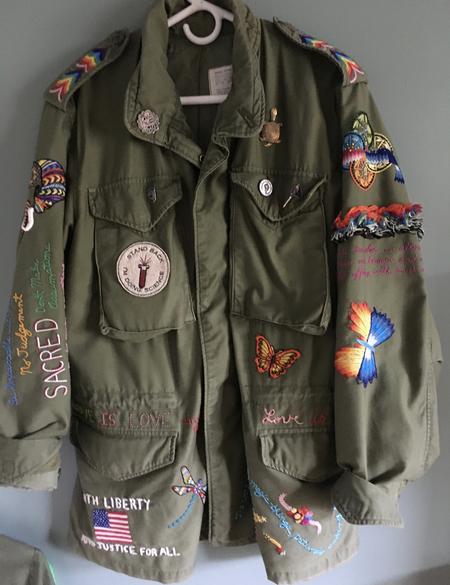 ​My friend requested an elephant on a jacket I was embroidering for him.  They stand for wisdom.  I found a mama elephant online and traced her outline.  She didn't have a nick in her ear but I saw a shadow and thought it showed character and wisdom so I left it.  This is the first time I developed this style I am calling "spirit" animal.  I liked his so much I did one on my jacket.  Thanks Craig for suggesting the elephant! 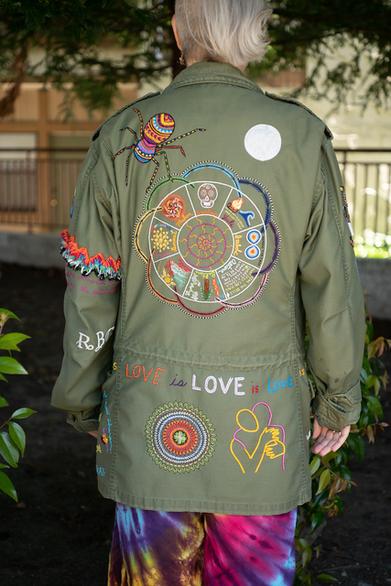 Ruth Bader Ginsburg
​An amazing and inspirational person.  She is my real life superhero.  I saw the movie RBG and decided to embroider her initials on my jacket.  I was on the G when she got sick.  I got superstitious and felt if I finished the G she would be finished.  I decided to leave it unfinished. 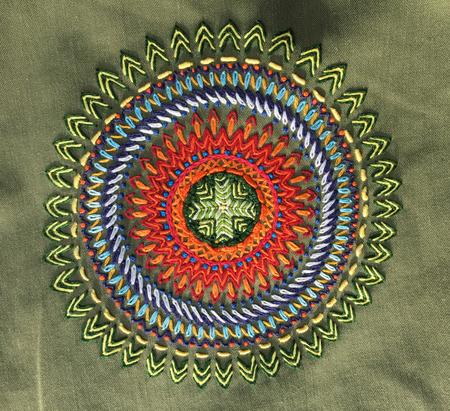 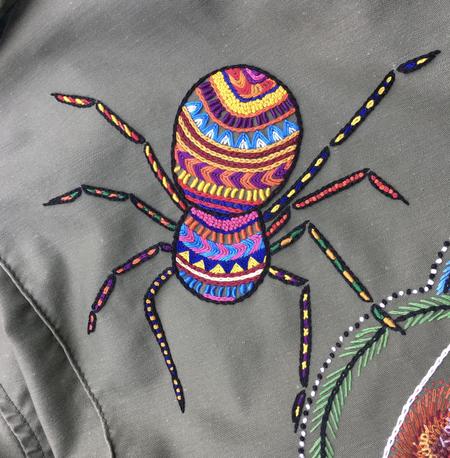 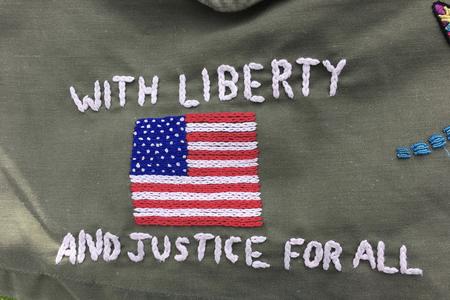 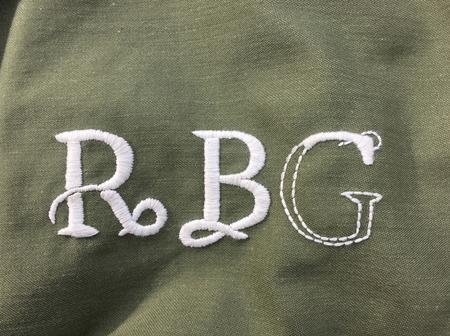 Hugging
​This is inspired by the work of Alexander Hernandes.  His work in fabric is amazing.  He had a piece with this image and I asked permission if I could use it.  It is an image he got online.  He said the best huggers are athletes!  I did my own search and he is right.

I plan on doing a series with different hugging images in the future.